Rio de Janeiro was always somewhere I’d always wanted to go and considering I was living in southern Brazil at the time, I couldn’t not make the journey to the beautiful city. I was living in Florianópolis, in the state of Santa Catarina and although the two places look pretty close on the map, it was actually about a 14 hour drive away, hence why me and my boyfriend at the time flew and it only took a couple of hours. Most of our friends had already been to Rio and we’d already been warned of the crime and how we would most likely encounter some form of a problem (and we did). We were staying in a cheap hostel right in the centre, about a stone’s throw away from Copacabana beach where we spent some time on the first morning, to be honest Copacabana beach was not as I had expected, you couldn’t get a break from people trying to sell you something, a man even tried to steal my boyfriends flip flops – he just put them on and started walking off! I felt that Copcabana was just one of those places that doesn’t live up to its name, it was no nicer than any other foreign beach I’d been to. However if I ever return to Rio de Janeiro, there are some spectacular beaches on the outskirts of the city which look almost like paradise.

We also went to the Jardim Botânico which definitely wasn’t worth the journey. It was stormy and the rain was torrential most of the time we were there. I should mention that we went for 3 days and in November which was verging on their summertime. After a bit of a damp and dreary day we thought we would go out that night in the Lapa region which is where we had been recommended all the clubs and bars were. We went to a place called Lapa Loca, it was a decent club and they had women in amazing outfits covered in jewels and feathers dancing the Samba all night. When the night had come to an end and my boyfriend and I wanted to go home we decided we would walk back to the hostel because our phones said it wasn’t that far and we could both speak the language if we came into any trouble, I can now admit that looking back, attempting to walk back to your hostel with google maps up on your phone, pretty drunk, in the early hours of the morning in Rio de Janeiro, a city notorious for its high levels of crime and violence was probably not the wisest of ideas, but hindsight is a wonderful thing and nevertheless we got robbed. We were walking down a normal road and then suddenly two guys appear literally out of nowhere and said they wanted all our stuff. We were both a bit reluctant to just hand over our phones and money etc.. but they insisted they had a gun and they weren’t afraid to use it, I realised that I actually didn’t have much money on me, my phone was smashed anyway and luckily my passport was in a locker back at the hostel so I thought the most logical and maybe the safest thing to do was to give them our stuff, so we did. And then we found ourselves lost, sat on the pavement, with no phones or money, at 3am in a city we didn’t know and I was practically in hysterics because I felt it was my fault (I had led us down that road) and I’d lost all my photos that were on my phone. I flagged down a taxi and asked him to call the police, he was reluctant but he could see how upset I was and sympathetically decided to help us. The police as you can imagine weren’t that much help, obviously this happens a lot in the area, about 90% of people I met who had been to Rio said they had had at least one thing stolen, they drove us around the area to see if we could find the two men, we thought we saw them with a big gang of people and I’m sure the police just decided they didn’t want to go over there so they just drove off and took us to the hostel. I had my iPad with me luckily so I tried to locate my phone using the FindMyiPhone app which showed that it was now in a favela somewhere probably already sold to someone. We gave up looking, it was about 7am, the other people in the hostel were getting up and we just wanted to sleep. It was truly a horrible night.

At an insulting exchange rate my parents managed to send me some money through a Western Union but I couldn’t even get it until the last day we were there. Fortunately for us, less so for our friend, we had a friend from home who had flown out specifically to visit us and he was meeting us at the airport that night, so we would be able to use his money for the time being.

We spent one really hot day getting a bus up the mountain where o Cristo Redentor (Christ the Redeemer) sits. It was a lot more touristy than I had anticipated, perhaps that was naïve of me considering it’s a World Wonder, we didn’t spend that much time at the top because all there was was an expensive cafe and a few souvenir shops. 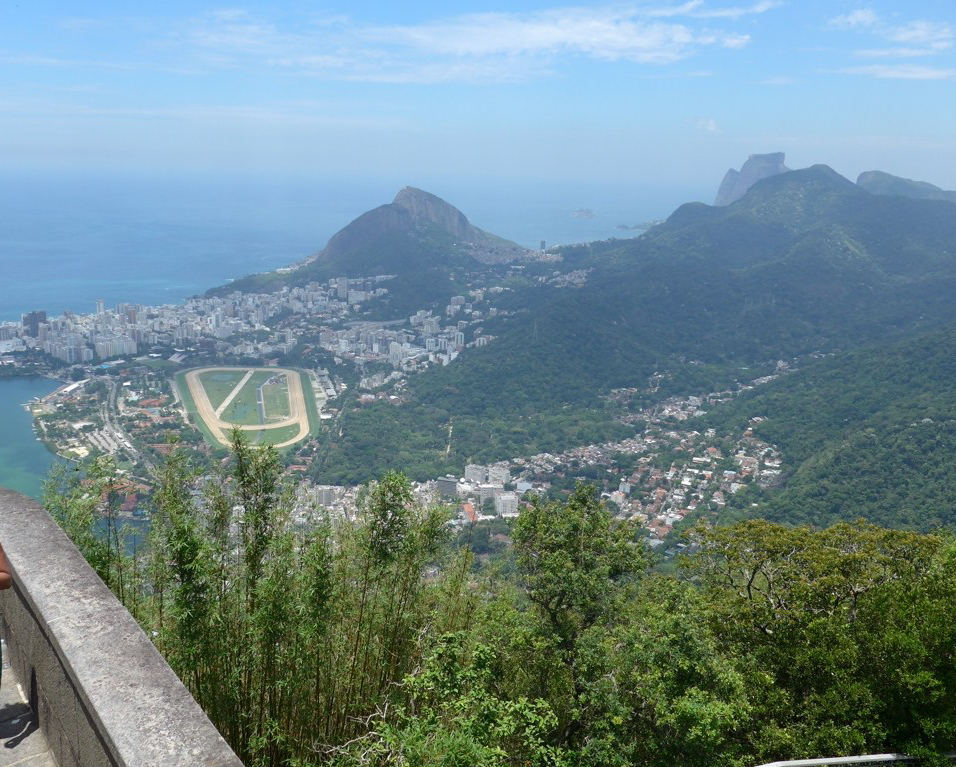 Obviously I can’t not mention Rio’s infamous favelas, I knew they were abundant but I didn’t know just how abundant they were. It was shocking to see the millions and millions of people living in such conditions.

My boyfriend and I took part in a tour of the Santa Marta favela (the one in the pictures below), it was one of the first favelas to be pacified and it was incredibly interesting. Now before you jump to conclusions, this favela tour wasn’t like we hopped in a car and drove around taking pictures of people living precariously, it wasn’t like that at all, we were recommended this tour from a friend who informed us that all the profits go directly to the favela, and on the tour you get to meet some of the people who live there and really get an understanding of such a level of poverty virtually unknown to us being from the UK. I learned so much that day about the favela culture and the lovely people who live there who welcomed us into their home. 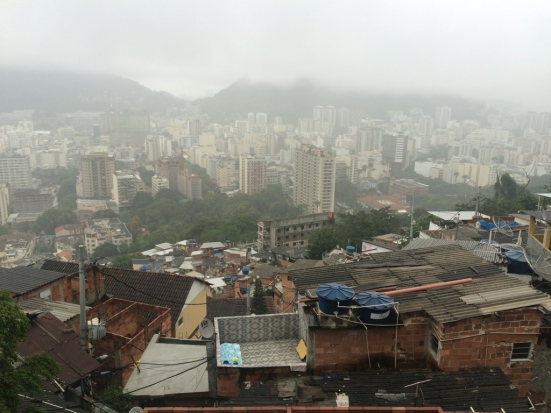 On our final day we went up Pão de Açucar (also known as Sugarloaf Mountain), it was incredibly stormy, we had just paid to get the cable car to the top when all these black storm clouds suddenly appeared and it started to torrentially rain. When we got to the top the weather was so bad we could barely see what was 10 metres away because it was so miserable and foggy. We got a snack at the top and were about to go back down thinking we had basically wasted our money as we couldn’t see anything from up there, but within ten minutes the clouds had started to shift and we were blessed with the most beautiful sunset over the city, it was a lovely end to our somewhat nightmarish trip.